Today, get the very first listen to the band with their debut single “I Lied,” a track we say “forges an alloy of decades-proven electronic pop and the kind of sincerity found in bands like fun. and twenty one pilots” in our Electric Century article in the upcoming issue, out March 4.

“I Lied” will be available for purchase via iTunes on February 26, and the band are expected to release their currently complete debut album (recorded and mixed by D. James Goodwin at The Isokon Studio in Woodstock, NY) later this year.

Stream the first single below and tell us what you think!
Pre-order AP 309, featuring Mikey Way

Exclusive: Mikey Way Moves On From MCR With Electric Century

Mikey Way began planning Electric Century long before My Chemical Romance hit it big, he just didn’t have the means to pull it off … mostly because he was 12.

“I was in my seventh-grade science class, and I wrote ‘Electric Century’ on a notebook, and I was like ‘I want to do this band,'” he told MTV News. “And right then I began filing away the kind of music I wanted it to be: Britpop, the party influence of bands like the Happy Mondays, New Order, Public Image Ltd. It was always something I wanted to do.”

And now, with MCR officially over, he’s finally (re)turning his attention to the project, teaming with David Debiak (Sleep Station, New London Fire) to make Electric Century a reality. The band was formally unveiled Wednesday, when Way’s image graced Alternative Press’ “100 Bands You Need To Know” issue, and since then, things have hit hyperspeed (EC is still so new that they don’t have an official press image).

But that’s fine with Way and Debiak … after all, they’ve been waiting for this moment for a while.

“We were supposed to have a little break after [My Chem’s 2006 album]The Black Parade, and I was like ‘Dave, me and you should really get together and start writing stuff,'” Way explained. “But unfortunately, we jumped right into another album after Black Parade, so we didn’t have a chance to do it … but we talked about it a lot.. And that basically continued for about four years. I told Dave ‘I don’t know when it’s going to happen, but it’s going to happen.'”

“Mikey would send me an annoying amount of voice memos, just little musical ideas, and I’d listen to, I don’t know, a countless amount of them before something stuck,” Debiak added. “I’d start writing lyrics based on those ideas, until eventually, about a year-and-a-half ago, we had time to make this happen. Since then, we’ve written about 35 songs, and right now, our entire focus is finishing a full-length album.”

Debiak handled the lyrics, and Way wrote the majority of the music — “I’m doing a little bit of everything; guitar, keyboards, background vocals,” he explained — and slowly, Electric Century began taking shape. There’s a full lineup being assembled as you read this (Debiak assured me fans will learn the full lineup very soon), and the duo plan on meeting with potential labels in the next few weeks … which means that, after nearly 20 years, Way’s fantasy band will finally become a reality. And, after spending a decade shying away from the spotlight as MCR’s bassist, he’s ready to step to the forefront with Electric Century.

“You know, on the day I showed up for the AP shoot, I was like ‘Where are the rest of the dudes?’ It was kind of like jumping into the ocean, like, ‘Here goes,'” Way said. “When I started in My Chem, it was no secret that I had bad anxiety and depression and drug issues, but then, starting with Black Parade, there was a sea change, and I broke out of my shell. And it led me to this point, where I’m ready to take charge now. It took me years to get here, but I know I’m ready.”

And to that point, Way knows that there are some My Chemical Romance fans that will probably never give his new band a chance. Shoot, some are still holding out hopes for a reunion. But he’s not concerned with the past … rather, with Electric Century, he’s embracing the future.

“When people first used the term ‘Electric Century,’ it represented the shift from steam power to electricity, and it changed the entire universe. And, for me, this is a complete change in my life, on many levels,” he said. “No matter what, throughout time, whenever somebody who was in a popular band goes to another band, there’s people that unconditionally love it, and there’s people who unconditionally hate it without listening to it … you’ve just gotta take it on the chin, and do what’s right, and write the best possible songs.hat point, Way knows that there are some My Chemical Romance fans that will probably never give his new band a chance. Shoot, some are still holding out hopes for a reunion. But he’s not concerned with the past … rather, with Electric Century, he’s embracing the future.

“As far as people saying ‘It’s too soon, My Chem just broke up,’ it’s like, ‘No, it’s just done,” he continued. “We’ve been formulating this in a laboratory for like four years now. We’ve written 35 songs. It’s time to do it.”

It’s finally here — AP’s 300th issue! A new format featuring My Chemical Romance‘s first AP cover story that’s been sold out for almost a decade. PLUS it includes artwork from Gerard Way inside and on a special subscriber only cover!
Pre-order both covers here: http://tinyurl.com/AP300MCR 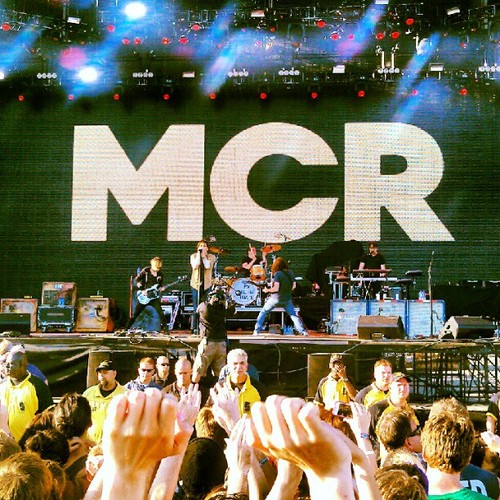 It’s been just over 36 hours since Kerrang.com delivered you the famous last words of My Chemical Romance and all that we have to console us is a brief black blog post on the band’s official website and a short tweet from Gerard Way.

Meanwhile, in the time that has passed since the story broke, Twitter has been buzzing with rumours. One rumour in particular however seems to be snowballing; the idea that MCR have ‘split’ in order to leave their record label, making them free to reform under a different name and continue with the same members and a fresh start.

Whilst there’s no concrete evidence or proof for this, and no further official statements have been made to confirm or deny the rumour, we couldn’t help but try and put some of the pieces together.

Are we all just in denial? Is this just the wishful thinking of die hard fans or is there really more than meets the eye? Call us K! conspiracy nuts, but let’s look at what we know so far…

Let’s face it, a paragraph doesn’t seem like a fitting way to call time on a twelve year journey and for one of the biggest bands on the planet to say goodbye. For all we know there may be a bigger statement to follow, but the existing black blog post just seems too abrupt and seems to leave too many things unsaid – it’s a gesture bordering on cold and an undeniably abrupt end to something that means so much to so many people.

Gerard Way’s final tweet, below, contains a picture of Harry Houdini, the famous escapologist, undertaking a dramatic escape as a publicity stunt. Is this all an elaborate publicity stunt? Could this be a hint that the members of MCR are trying to escape their label?

Is the image a reference to the opening line of the video to I’m Not Okay (I Promise), [“You like D&D, Audrey Hepburn, Fangoria, Harry Houdini, and croquet. You can’t swim, can’t dance, and you don’t know karate. Face it, you’re never gonna make it.“] – If so what does this mean?

We know for sure that the image appears on the sleeve of the band’s first record. Could this be a hint at a rebirth for the band? Whatever the case, like the black blog post, it almost feels too short to be sincere.

Want to know something spooky? Today is Houdini’s birthday.

Until the sudden split My Chemical Romance were hard at work on their fifth studio record. How can a band go from sculpting their future to dissolving everything that they have overnight? To us, this just doesn’t add up.

The people closest to MCR’s reactions:

Lyn-z Way, Gerard’s wife published an extended tweet that stated, amongst other things, “I understand the need for change and the desire to begin again” and “The future starts right now. A new adventure is about to take place and I for one will be on that ride!
Who’s coming with me?” – if you read this in light of the rumour that MCR are trying to reboot in order to leave their label then this post has some extremely interesting implications.

Then there’s the intriguing case of Mat Devine from Kill Hannah’s tweet, below. He’s a close personal friend of Gerard, is this a sign that there’s more to come from MCR? Or even a collaboration between Gerard and Mat?

The previous use of alter egos:

My Chem are no newcomers to using alter-egos and pseudonyms. When we saw them in 2006 they announce on the PA that My Chemical Romance would not be performing, and then played under the pseudonym of The Black Parade. Plus on the last record they referred to themselves as The Fabulous Killjoys. Could the abrupt split be little more than a name change? What would happen to the recordings that have been completed for album number five in that were the case?

Finally there’s a blog post circulating that states that Frank Iero and James Dewees of The Get Up Kids are starting a new electronic hardcore band. What impact will this have on MCR?

All we have right now is speculation and questions, but make sure to keep your eyes on Kerrang.com for more updates and all the latest facts as we get them.

Be sure to add your take on these clues and rumours below. Is there more to come from the members of My Chemical Romance?